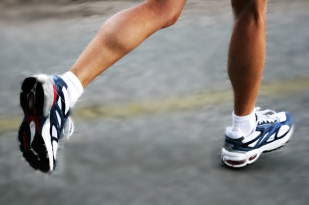 I have started running.

I always wanted to, you know, but there were naysayers lurking about in the corners. Telling me I was too old, and it was bad for my joints and “walking burns just as many calories anyway.”  Wrong they are, on all counts.

I ran track in middle school–the 400, the 800 and the 1600 meter relay. I enjoyed it, but didn’t pursue it. I have no idea why. For all these years since, I have seen runners in the park, on the side of the road, on television, even on treadmills at the gym and wondered what it would feel like just to put on shoes and…run.  Just…go.

The stars lined up recently and led to half a dozen or so conversations with people who run. I decided it was a sign, so I did a little research (thank you Runner’s World) and started running. It isn’t as smooth a path as I originally thought it would be, what with finding a training program, learning new words (like “pronation”), learning the difference in all the shoes and worst of all, buying the shoes without the help of an expert fitter. I did my best and the shoes I ended up with seem pretty good. I’ve been out in them twice and I do feel a lot better than I did running in my old shoes.

I’ve had to get used to the idea of wearing polyester and nylon. I’ve also had to get used to the idea that mileage is gained one mile at a time. It’s never easy, but it does get easier. That’s what the “masters” say. (That’s another word I learned.) Even when my feet and legs are aching and I’m worrying that my left leg gait isn’t as efficient as the right, I have to admit I’m having the time of my life. I’ve even discovered the joy of running in snow, one of most amazing half hours I’ve ever spent. (I hope to repeat it as soon as flakes begin falling again!)

In just a few short weeks I’ve run more than ten miles. Soon I hope to be running ten miles in one day! And my longterm running goal: to run and finish the New York City Marathon in 2009.

If you see me running by someday, grab your shoes and come along. I promise the human body–your body–was engineered to run. You will feel good and strong. You might just find that you really really like it.