Having survived 5k and one-mile races, I registered for the Mayor’s Two-Mile Race. Our mayor, when she got elected, made physical fitness a priority for Amarillo and so once a year she sponsors a race in Medical Center Park (and beyond). There is a two-mile race, a five-mile race and a half marathon. (That’s 13.1 miles, in case you’re not a runner.) I really was interested in the five-mile, but wasn’t sure I could run that far yet in race conditions…so yeah, the two-mile for me.

Early to bed, early to rise…gets a runner to the starting line on time. The conditions were perfect: 60 degrees and foggy. I drove to the park whilst choking down half a Power Bar and 8 oz. of sports drink. (The perfect pre-run combination of protein, carbs and electrolytes, according to Runner’s World Magazine. And let me add that Power Bars taste like crap.) Arriving in plenty of time, I picked up my race number and complimentary t-shirt, then spent a little time walking briskly and jogging slowly to get warmed up before the start.

I spent about ten minutes silently observing my fellow runners. I recognized a few from the other two races I’ve run, but I don’t know anyone’s name and no one ever talks to me. I’m curious about a few women I saw, who appeared in full makeup with hair fixed. They had half marathon numbers pinned on and I couldn’t help but want to see them after they’d run for 13.1 miles. I’m pretty sure lipstick doesn’t hold up that long. Maybe it’s that semi-permanent stuff Queen Latifah touts on TV. Who knows?

When it was time, we all lined up to hear a short speech from the mayor, who does not run or walk the races. She said what she had to say, fired the starting gun and off we went.

I neglected to drive the course for this race, so while I had a vague notion of what it would be like, I did not realize the first mile or so was UP A HILL. Let me repeat that: UP A HILL. And not a gradual grade either. My neighborhood, where I train, is flat as a pancake, so hills are not part of my regular running. I think they will be from now on. I really really really thought I was going to die. I really really really wanted to walk, starting at about half a mile. But that was when I passed the five-year-old.

Yes folks, there was a five-year-old boy running in this race with two adult companions. One of the guys with him kept up a steady Zig Ziegler-style commentary to keep the kid on track. So I passed the three of them, but then they stayed about 20 feet behind me. I have to say I was encouraged, right up until the guy yelled, “Yeah! You’re running like an 8-year-old!” (I hoped I was running more like a 10- or 12-year-old.)

Made it to the first mile marker, where we passed some random guy watching the race from the sidewalk smoking a cigarette. As I ran by him, I found myself enveloped in a puff of smoke and it was DIS-GUST-ING. I actually got nauseated and I thought I might have to throw up. When you are running a race and you need every bit of oxygen you can get, running through smoke is the equivalent of someone putting their hands around your neck and attempting to choke you. YUCK.

Okay, made it up the first hill, made it past the gross smoking guy, now we were at a slight downgrade, but I could see another hill ahead. I was discouraged, but my mile split time was 9:30 and that’s pretty darn good for someone who never runs hills so I felt a little encouraged. I actually made it up that small hill and that’s when the five-year-old started crying. I wanted to cry along with him, for real! I just kept listening to his cheerleader yelling, “This is the last turn, buddy! Just keep breathing! You can do it!” (I think God puts me next to people who yell for a reason.) At that point I really had to talk myself out of walking, just for a minute, that’s all I wanted, just a minute of walking. I kept going.

We did turn that final corner, only to find another uphill grade. Not too bad, but still. The fog hadn’t lifted yet, making it impossible to see the finish line. I’m not sure if it’s better to be able to see how far away you are or not. My watch said 17:00 and my fastest time to run two miles was 22:00 before today, so I was thinking at a minimum I had five more minutes to run and frankly, I didn’t think I could keep it up five more minutes. I kept going.

As we ran past the hospital parking garage, I heard clapping. There was a lone man clapping for us and that made me feel better. (It’s the little things.) I kept going.

Finally, FINALLY, I heard real applause and the “You’re almost there” yells that accompany the finish line. I saw a woman up ahead of me move to the right. I followed suit because I figured she could see the finish chute. Sure enough, there it was and I could see the official time in the 19:00 range. I kicked and got there as soon as I could, finishing at 19:56. That’s 2:04 faster than my fastest two-mile run.

I was so relieved to be finished, I didn’t really register the number right away. I limped over to where the tables were set up, ate an orange, drank some Gatorade and watched the volunteers laying out awards. That’s when it occurred to me that maybe I had a fast enough time to place. (Usually they hand out awards for the top two or three in your age bracket. My age brackets is females 30-39.) After all, most of the local “elite” runners were probably running the half, not the shorter races. It was pretty chilly, so I went to the car to get my hoodie and returned just as they called out my bracket. In first place, “NORMA C*****.” I’m sure I had a weird look on my face, because some people laughed as I walked up there. I never in a million years expected to get first place—not with that time! But hey, I’ll take it!!!

I left with my fancy plaque and I stayed stoked all day, even though I got a post-race headache that lingered for several hours. Having a 19:56 was enough to make me look forward to the next race, but actually winning something really did it.

Next up:  Race for the Cure 5k 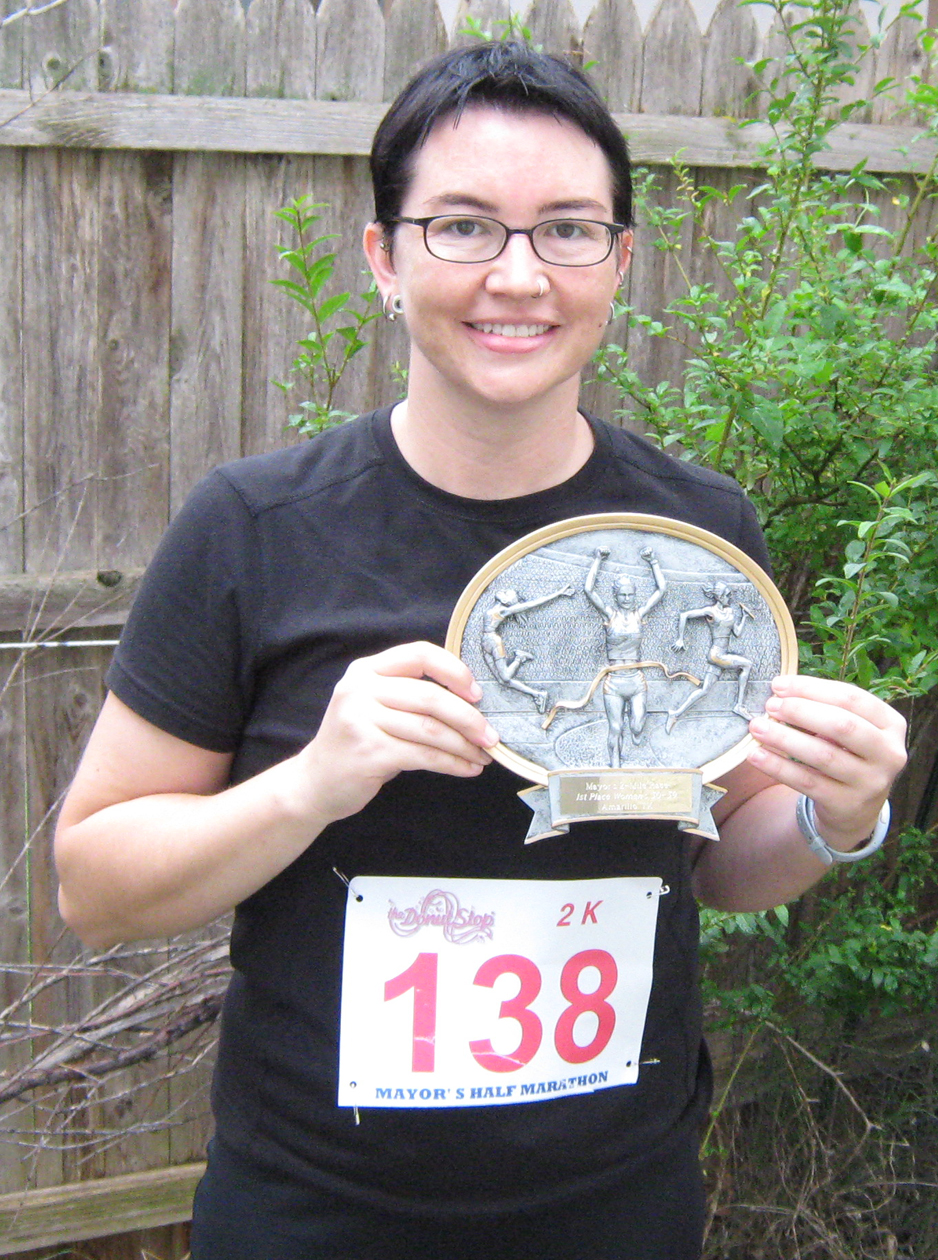