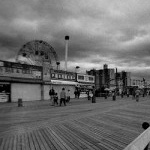 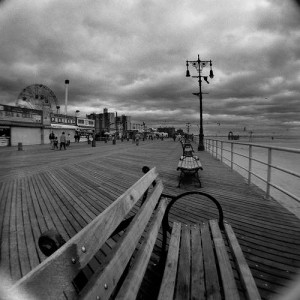 Today, in an effort to jump start my running again, we went down to Coney Island. Finally, there is evidence of the rumored changes that will forever affect the way the famed boardwalk looks. Arriving at the stairs near “Shoot the Freak,” we discovered that “Shoot the Freak” was shut down–along with the strip of shops and restaurants around it. In fact, about 20 feet of the boards are missing from that area, too, surrounded by chain-link fence. I assume they’re fixing the boardwalk itself there, and there are “shops for rent” signs all along that hundred feet or so.

Even two years ago when we made our first trip to Coney Island, we were continually told that it was “closing” and that all the attractions were going to be torn down and replaced with condos. According to the site I linked to above, that’s not entirely true. In 2009, there will be lots of things open and operating, including the Cyclone, the Wonder Wheel and the freak show. That’s good news.

Coney Island isn’t like Disneyland. Everything is owned separately, so I can understand how there is confusion over what is still there and will remain and what will go away. Sadly, Astroland is gone. It’s a shame that such a piece of Americana will eventually be overcome by rich people living in brick boxes and other progress.

Here are some pictures in the meantime: http://www.flickr.com/groups/coneyislandisaliveandkicking/pool/

Anyway, Mike was there to walk and I was there to run, thinking the boards might be somewhat forgiving to a runner who hasn’t run in awhile. I took off and ran all the way to the Manhattan Beach end and back, which is about two miles. On the way I passed Brighton Beach, which is a Russian neighorhood. Pretty nearly everyone you pass there is speaking Russian. It’s pretty cool and we’d like to visit some of the delis, after seeing them on Bizarre Foods. ha ha

It was a cold day, reasonably good for running, but not so good for much else. We spent about an hour and then got on the train to go home. Planning a lot more trips to the beach this spring and summer!