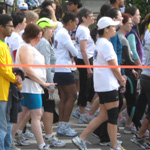 I ran the Joe Kleinerman 10k a couple of weeks ago, my ninth race of 2009, capping off my first year of running in NYC (and guaranteeing my entry into the marathon in 2010). I don’t know what other people think about when they run, but I generally think about what I would tell people about running. My geek status is probably secure by admitting that. (Or cult status, if you believe my friend Mindy.)

So during this particular race, I was thinking back to my first race post-move, which was the four-mile Run as One way back at the beginning of April. I recalled the surreal nature of lining up to race with about 7500 other runners. At that point the largest field I’d raced with was about 400 at Amarillo’s Thanksgiving Day Turkey Trot 5k. Further, the surreal nature of lining up to race in Central Freakin’ Park was a bit overwhelming at that race. The Kleinerman 10k was the seventh race I’ve run in Central Park this year and trust me, that feeling wears off. I’d LOVE to race anywhere else at this point! But the upside is that I’ve done a fair amount of Central Park sightseeing via running and I’m pretty familiar with the lay of the land now.

Something I’ve enjoyed throughout the year is the camaraderie at the various races, the chatty fellow runners in the corrals, the friendly and helpful volunteers. I always found the runners in Amarillo to be quite snobby. I spent a couple of the six-point-two thinking about the nice people I’ve met, including the woman who yelled “I’m following you!” while I scrambled over an outcropping of rock before the race to get to the baggage area. (Thanks for being late, 6 train!) She was quite nice and we convinced one another that cabs on race mornings are probably better than public trans.

I spent most of the race just reliving other great race moments, like my first sub-30:00 5k at the Wall Street Run and my first appearance in the pink corral at the Japan Day race. (It’s the little things.) Not to mention continual PRs just from improved fitness and running on hills! (I never knew I could love hills…but I do…) 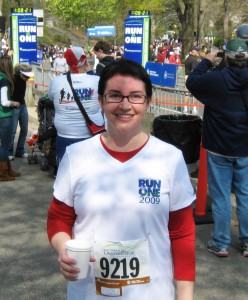 I was going to take it easy in 2010, maybe run a half and then the Marathon in November, but I made the mistake of looking at the New York Road Runners calendar. I’ll be running a five-mile race in January (a new distance for me) and a 5k in February–because it’s in Prospect Park, practically in my own backyard and far from Central Park! I also plan to run the Brooklyn half marathon for sure because you just can’t beat ending a race at Coney Island. But that’s it.

I’m pretty sure of it.