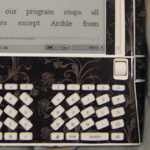 I’m on year three and counting with my Kindle–and still using version 1, because the SD card is just too big a draw to me to upgrade. My Kindle was a Christmas gift from my husband back in 2007 and it took no time at all to load it up with books and kiss paper goodbye!

No, that’s not how it happened at all.

I love gadgets and reading, so I adored my Kindle from the beginning for being the best of both worlds. I had no idea when I opened the box that I would eventually get rid of hundreds–hundreds and hundreds–of paper books in favor of digital versions. But that’s exactly what happened. I was kind of a book hoarder, ahem…collector, and my small apartment was crammed with somewhere in the neighborhood of about 2,000 books. This was a huge problem whenever I had to move, because books took up about half the boxes and friends were always reluctant to move them. I generally moved all the books by myself first, then called friends in later to help with the rest.

The Kindle was such a book-like piece of plastic that it didn’t take long for me to begin considering a purge. This prospect was helped along by our looming halfway-across-the-country move. I started taking a good look at my shelves and mentally dividing books into categories:

That fourth category was a no-brainer. Any book that I couldn’t see a reason to have went to Goodwill or the Salvation Army. I said goodbye to a couple hundred books that way straight off the bat.  The Manuals category was also fairly straightforward; anything that was still relevant stayed.  Then I went to work on category one: Sentimentally Attached. It took several months to choose books for this category, but when I was satisfied, that left me with the largest category: Good but Unneeded. These were given away to friends, mostly (thank you Myspace and Facebook). Those that couldn’t find homes were released into the wild.  When it finally came time to move, I managed to cull the sentimentally attached group even further, down to fewer than a hundred books.  Among them are a book that includes a note from my great-grandmother and several favorites from my childhood.  We ended up packing just a few boxes of books to bring with us.

I didn’t intend to stop buying paper books all together, but that’s what happened.  I replaced some of my paper books by buying digital versions from Amazon or downloading them for free from Project Gutenberg.  Mostly I just moved forward–all of my new books were Kindle books.  What’s weird is I still love visiting bookstores and perusing the books.  I just don’t buy anything.  I make mental notes of what looks good and then check Amazon to see if they’re available for Kindle.  My recent acquisition of an Android phone now lets me read my Kindle books on the phone and it allows me to share books with my husband on his Droid.  I don’t think I could ever go back to plain paper now.