First, I hate talking on the phone.  I do.  In my earlier years I loved it–LOVED it, but over the past few I’ve just morphed into a preference for texting and email and chat and anything but sitting or standing with a device plastered to my ear.  (Admittedly, the earphones with the built-in microphone does make it easier.)

Two years ago I got my first smart phone, which was an HTC Tilt running Windows Mobile 6.  It was cool for about six months, when I realized it was completely clogged up with crap.  I’m a long-time Windows user and I’ve never had a problem with a desktop or laptop, but this phone was a conundrum–no Windows updates?  What?  There was no easy way of clearing memory or deleting temporary files.  The sync never did work properly.  The touchscreen technically worked, but wasn’t sensitive enough to use my finger all the time and I generally fell back on the stylus.  And the thing weighed two pounds!  (Or felt like it did.)

The weight became a problem; it didn’t mix well with my running.  At first, I just left the phone at home.  But as my runs became longer and more frequent, my husband became uncomfortable with the idea of me not having a way to call for help should I need it.  That began a long line of accessory purchases as I looked for something that would accommodate the size of the phone without bouncing too much because of the weight.  (Nevermind that by this time, it had stopped making and receiving most phone calls.)

About a year ago, while attempting to clear out old text messages, I accidentally reset the phone to its factory defaults.  On a positive note, it suddenly began ringing again when someone called.  On a negative note, it lost all the contacts it had indicated were saved on the sim card.  C’est la vie.  I didn’t need to stay in touch with all those people anyway.  I began shopping for a new phone.

iPhone was out for a number of reasons and I had my heart set on an Android phone, but most importantly, I had my heart set on the finding the smallest smartphone on the market.  Enter the HTC Aria.   I starred it in my shopping notes as I looked for phones online and then went to AT&T stores twice to hold one and see just how small it was.  Most of the reviews mentioned the small size and that it could be difficult, but I now suspect those users were accustomed to much larger phones.  As soon as my phone upgrade was available, I made sure the Aria was on the way to me!  And I couldn’t be more pleased! 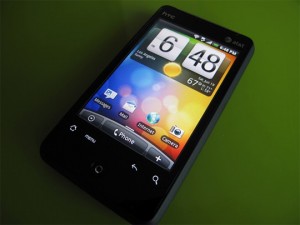 The phone is so streamlined–and not just compared to my old clunker.  It’s thin and smooth and the screen takes up most of the phone, so it feels larger than it is.  The camera lens is sunken, so it doesn’t get scratched or dirty.  The buttons are all intuitively placed and not easy to mistakenly push.  The screen is sensitive, but not too sensitive.  AND ANDROID ROCKS.  It supports flash, its native browser behaves just like a full-sized browser, sync works and the phone can also be mounted as a simple disk drive, it allows multiple “desktops” that you can personalize however you see fit, the speech recognizer actually recognizes your speech–it has yet to make a mistake on anything I’ve said…I could go on and on. There’s even a drag and drop app creator and battery life is very good!)

I didn’t know a phone could change my life without really being used to call anyone.  Yes, I make a few phone calls a week, but I really use it as a very small computer without giving much thought to the phone function.  In fact, I’m more likely to use the wi-fi connection than the mobile internet.  I feel more connected to my friends and family, I feel more productive in my work, I feel more creative.  I feel safe on my runs because the Aria works well and is small enough that I don’t mind carrying it.  I highly highly recommend the HTC Aria and the Android OS (and its HTC Sense counterpart).  Barring tragedy or something even smaller, I may keep this phone forever!

Here are some other glowing reviews and Android fun stuff:

10 Things Android Does Better than iPhone