I think I’m not going to correct them.  No telling what crap I’d see if they knew the truth. 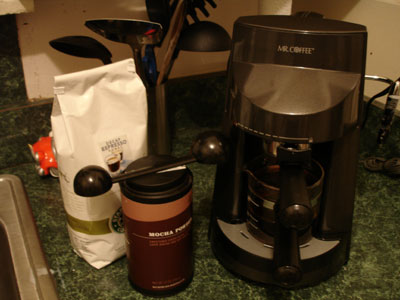 I’m a coffee drinker from way back. In fact, I’ve often wondered if instead of being born in the usual way, I was hatched somewhere from a coffee bean. I know as a toddler my grandparents would give me coffee, with plenty of milk and sugar of course.

Over the years my taste in coffee would grow to include the drink of the gods in all its forms: black, black with sugar, black with cream, black with cream and sugar, hot, cold, full-caf, half-caf, decaf, etc. Eventually I moved to a much larger city and was delighted to discover the joys of the coffee house. I was a regular at a local establishment for more than ten years, where I honed my coffee drinking considerably, finally settling on the decaf mocha.

Circumstances turned unpleasant about the time Starbucks came to town, but I’m not a snob. No indeed. I will darken the doorstep of a Starbucks anytime I come across one. Their coffee ended up being better than the local shop anyway–not tasting burned, you know. So yeah, for the past few years I have been a Starbucks regular, honing my coffee tastes again to the decaf non-fat no-whip mocha at $4.50 a pop that I now love. (Way fewer calories in that, I can tell you, even if it is pricey.)

Last Christmas, my husband (then-fiance) gave me an espresso maker as a gift. I freely admit to being a procrastinator. It’s entirely true and it’s the reason I never even tried it out. After all, there’s no way I can make a mocha at home to rival that of Starbucks. Or is there…?

Yes, dear readers, I am triumphant. No more getting into the car on a cold morning and driving to Starbucks. No more worrying about whether Starbucks is open. No more spending $4.50 on my precious decaf non-fat no-whip mochas. My life is transformed. Come by for coffee sometime. I’m tackling vanilla lattes next…